Preparedness pays off in many ways

For nearly two years, the American Red Cross has been working in partnership with Governor Andrew M. Cuomo and the New York State Division of Homeland Security and Emergency Services to offer free Citizen Preparedness Corps training for thousands of New Yorkers. The Citizen Preparedness Corps program provides a comprehensive overview of how to prepare for, respond to and recover from the types of natural and man-made disasters most common in New York State.

Jeremy Slaybaugh of Watervliet, NY was looking for ways to get himself and his family better prepared for emergencies when he came across information about the Citizen Preparedness Corps:

“We had a boil-water advisory, and we were really not prepared,” Jeremy explained. “By the time I got to the store to buy emergency supplies, the shelves were empty, and I said to myself, ‘Oh no, I am not letting this happen again.'” 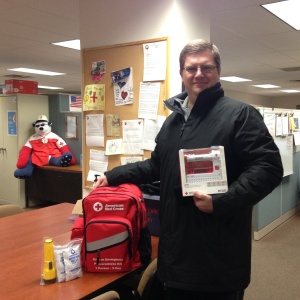 Jeremy started researching personal emergency preparedness and eventually found an upcoming Citizen Preparedness Corps training session at his local Red Cross chapter. He signed up and by participating, he was entered to win a Deluxe Emergency Preparedness Kit (a $99 value) from the American Red Cross.

Besides the obvious benefits of learning how to prepare for and cope with common disasters, Jeremy was one of three lucky preparedness kit winners in October 2015! He stopped by our Albany office last month to collect his prize:

“I was so surprised when I got the email that I had won something,” he said. “It’s great to have all these essentials covered, and now we have something to build on to make sure our whole family is prepared.”

Coincidentally, this was not Jeremy’s first interaction with the Red Cross. His son Gabriel was honored at the Northeastern New York Chapter’s Real Heroes Breakfast in 2014 for his heroic actions when his father – Jeremy – suffered a seizure. Jeremy was especially excited about taking his preparedness kit home, going through it with his son, and continuing the conversation about preparedness with his family.

The Deluxe Personal Emergency Preparedness Kit giveaway will continue through March 2016 in the Eastern New York Region. Three preparedness kits will be awarded each month. Anyone who participates in a Red-Cross hosted Citizen Preparedness Corps training session, or who takes the 15-minute online training with a Red Cross referral, is eligible to win during the month in which the training occurs.